WAYNE & CATHY JUSTUS
Wayne and Cathy Justus raised show-quality quarter horses in California for years, and had a wall full of blue ribbons to show for it, when they moved their operation to beautiful Pagosa Springs, Colorado, in part to take advantage of the clean water .

The Justus Palette J Ranch quarter horses had always been healthy, but that good health stopped abruptly in 1985 when Pagosa Springs added silicofluoride chemicals to the municipal water supply. The Justus horses began to display many apparently unrelated symptoms that Wayne and Cathy were unable to classify, and, worse, baffled their veterinarian.

The first acute symptom after fluoridation was colic, the number one killer of horses, then Cushing’s syndrome, thyroid and other metabolic issues, skeletal fluorosis, hoof deformation, and more. Foals were dying, mares were dying. Eventually, Wayne and Cathy lost six beautiful show horses and four dogs.

In 2004, when Cathy finally had incontrovertible scientific proof that fluoride from municipal water caused the deaths, she became a tireless and effective campaigner for fluoride-free water. In 2005 Cathy’s efforts were crowned with success when Pagosa Springs stopped adding fluoridation chemicals to its water. Colic disappeared immediately and, although fluoride remained in the bones of the Justus horses, the other mysterious illnesses that Wayne and Cathy’s animals, and their neighbors animals, had suffered for twenty years began to abate.

POISONED HORSES: A DOCUMENTARY by  Dr. David Kennedy, DDS. Running time 33:55 minutes. Cathy and Wayne Justus explain how they learned that their dogs and their world class quarter horses were being poisoned by fluoridated tap water, and how they dealt with it.

Poisoned Horses producer and interviewer David Kennedy, DDS is the Past President of the International Academy of Oral Medicine and Toxicology, and the Director of FLUORIDEGATE: An American Tragedy. Many thanks to Dr. Kennedy, holder of  the Poisoned Horses copyright, for graciously permitting access to the complete video.  Our deep gratitude to Cathy and Wayne Justus for their courage and permission to share this video with the world. 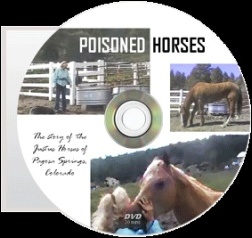 Fluoride poisoning doesn’t always show, as in this photo of  Win (Winning Gold Bonanza) and Cathy Justus at the 2008 Colorado State Fair. Win, a dysmature foal, was born with skeletal fluorosis from in utero exposure  to fluoride ingested by his dam Baby Doe (Perfectlydun Bonanza).

After Baby Doe’s death, Cornell University’s Dr. Lennart Krook, DVM, PhD, did a necropsy on her bone, confirming chronic fluoride poisoning. Win was only 10 years old in 2008, and in his short life had already won 40 Grand Championships, and many other awards. The 2008 Colorado State Fair was the last time Cathy could show Win, who had to be kept moving all the time to keep him from locking up.  Even though Pagosa Springs fluoridation ended in 2005, fluoride was still in Win’s body, mostly in his bones, still poisoning him, with remaining fluoride damage throughout his system.  Win would die, suddenly and in great pain, of fluoride-related illness in 2012.

Dr. Krook was the world authority on chronic fluoride poisoning in cattle, so he recognized the Justus horses’ symptoms, and knew what tests were necessary to prove the cause. Dr. Lennart Krook (1924-2010) was Professor Emeritus of pathology and radiology at Cornell University Medical College in New York, NY, and Editor-in-chief of The Cornell Veterinarian, a peer-reviewed scientific journal.

FAILURE TO DIAGNOSE FLUORIDE POISONING IN HORSES CAUSED BY WATER FLUORIDATION. Editorial by  Dr. Albert Burgstahler (PDF). Fluoride 39(1)1–2 January-March 2006. SUMMARY: Since 1974 a widely accepted dry weight dietary fluoride tolerance of 60 ppm F for horses has been recommended by the US National Academy of Sciences. A recent study, however, revealed that artificially fluoridated drinking water (≤ 1.3 ppm F) was the cause of previously undiagnosed chronic fluoride poisoning in Quarter horses on a farm in Pagosa Springs, Colorado, beginning in the mid-1980s. After fluoridation was  terminated there in March 2005, colic, stiffness, lameness, and other reversible manifestations of fluorosis have gradually disappeared.

FLUORIDE POISONING OF HORSES FROM ARTIFICIALLY FLUORIDATED DRINKING WATER. Research report by Lennart P. Krook and Cathy Justus. Fluoride 39(1)3–10 (PDF) January-March 2006. Peer reviewed, published scientific article on our horses and others. INTRODUCTION: Although the literature on fluorosis in cattle is extensive, information about fluorosis in horses is almost nonexistent. A 1974 US National Academy of Sciences–National Research Council report on effects of fluoride in animals gave only one reference to horses in which dental and radiographic skeletal changes were described in horses grazing in areas where cattle and sheep had developed severe fluorosis. The report stated: “No carefully  controlled studies have been conducted to determine the effect of excessive fluoride ingestion on horses.” Here we present evidence that artificial water fluoridation can cause serious fluorosis in horses.

ALLERGY IN HORSES FROM ARTIFICIALLY FLUORIDATED WATER.  Research report by Lennart P. Krook and Cathy Justus. Fluoride 39(2)89–94. April-June 2006. PDF available on request from Clean Water Sonoma-Marin. SUMMARY: As described recently in Fluoride, horses on artificially fluoridated water (AFW) developed chronic fluoride poisoning. This report describes an allergic manifestation as an addition to the classical signs of fluorosis, viz., urticaria. The skin lesions disappeared promptly when an affected horse was removed from AFW and returned promptly when the horse was returned to AFW. These reversible changes attest to the highly allergenic potential of fluoride.

FLUOROSIS IN HORSES DRINKING ARTIFICIALLY FLUORIDATED WATER. Research report by Pixi Macicek and Lennart P Krook. Fluoride 41(3)177–183. July-September 2008. PDF available on request from Clean Water Sonoma-Marin. SUMMARY: Quarter Horses drinking water artificially fluoridated at 0.9 to 1.1 ppm over long periods of time developed dental fluorosis. Even when the horses had not been exposed to artificially fluoridated water (AFW) during formation of enamel, brown discoloration occurred and progressed. Pronounced loss of tooth-supporting alveolar bone with recession of bone and gingiva was also present as more severe signs of chronic fluorosis than enamel changes alone. The scene of these events was a lowland part of Texas just above sea level. AFW at these low concentrations can obviously induce chronic fluorosis in its own right without the support of high altitude. With a change to low fluoride (0.1 ppm) well water, a remarkable improvement was observed in the general health of the horses in a very short time. Most notably, bothersome episodes of colic promptly ceased.

RACEHORSE BREAKDOWNS AND ARTIFICIALLY FLUORIDATED WATER IN LOS ANGELES. Guest editorial by Richard D Sauerheber, PhD. Fluoride 46(4)170–179.
October-December 2013. PDF available on request from Clean Water Sonoma-Marin. EXCERPT: Measurements of fluoride ion concentrations with a LaMotte Instruments fluoride specific electrode confirmed that water fluoride levels were increased in Metropolitan Water District water five-fold from 0.2 ppm natural to 1.0 ppm total, including artificial fluoride from fluorosilicic acid. Breakdown incidence increased precipitously thereafter. The last data value in 2011 represents 7 fatalities per 1,000 racing starts. The peak breakdown incidence was the highest in the country at 10.8 fatalities per 1,000 starts. In a two-year period, 186 horses perished at Los Alamitos. After the fluoride level was reduced in February 2011, following a recommendation of the US Health and Human Services, there was a downward trend in the fatalities. In 12 years, for 170,000 racing starts, there were 708 fatalities.