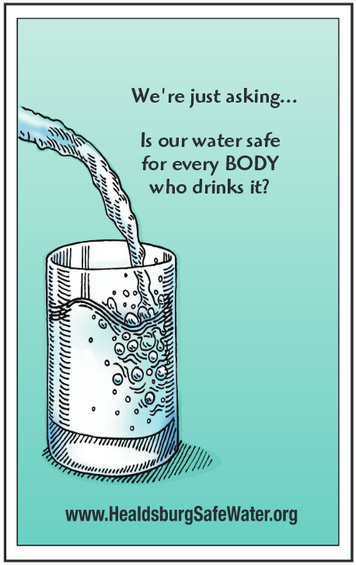 The following impartial analysis of Measure T was prepared by the office of the Healdsburg City Attorney: This initiative was placed on the ballot as a result of a petition signed by the requisite number of voters. The stated purpose of the initiative is to adopt an ordinance requiring the City of Healdsburg to institute an immediate moratorium on all municipal water fluoridation until such time as the manufacturer supplying the fluoridating chemical provides to the public:

The addition of fluoride to the City’s municipal water was approved by the voters in 1952. In November 2014 a majority of voters approved continuation of fluoridation by the City.

A moratorium is a temporary period of suspension. If instituted, it could only be lifted upon compliance with all of the conditions listed in the text of the initiative. Based upon information included in a report prepared by City staff and presented to the City Council, it is uncertain, at best, whether the City could comply with one or more of the listed conditions. The City operates under a Domestic Water Supply Permit issued by the State.

Before instituting a moratorium on fluoridation the City would be required to seek and obtain from the State an amendment to this permit. The City would also need to obtain all of the information as specified in the initiative in order to restart fluoridation. To date the City has been unable to obtain confirmation that these conditions could be met. As a result, there is no certainty that a moratorium could be lifted.

A “yes” vote is a vote to institute a moratorium on fluoridation unless or until the City is able to obtain the required three categories of information specified in the text of the initiative measure, assuming the State grants permission to amend the City’s Domestic Water Supply Permit. A “no” vote is a vote to continue fluoridating the City’s drinking water.

Official arguments in favor
The following official argument was submitted in favor of the measure: Vote Yes on Measure T. Require proof that fluoride chemicals are safe for ingestion before they can be added to our drinking water.

Unsafe. In 2014, Healdsburg was told that fluoride ingestion was “safe and effective.” Now Healdsburg officials say “proving such a thing is impossible.” The City conducted an investigation in July, 2016. It determined that Hunan, a fluoride manufacturer from China, and its Healdsburg distributor, Brenntag, “cannot, or will not, provide a toxicological report for sodium fluoride” and confirmed “neither Hunan nor Brenntag would certify that the sodium fluoride is safe for all human consumption.”

The EPA has listed fluoride as a neurotoxin. Negative health effects, including lowered IQ and Skeletal Fluorosis, fueled the fluoride ban in China. Brenntag’s Material Safety Data Sheet (MSDS) warns sodium fluoride is “Toxic/Poisonous!” and ingestion causes many negative health effects. The U.S. Department of Health recently recommended lowering the level of fluoride in drinking water by nearly half due to the Dental Fluorosis epidemic, visible tooth blemishes that indicate fluoride poisoning.

Ineffective. In 2015, Sonoma County Department of Health Services released a survey finding no significant difference in tooth decay rates between fluoridated Healdsburg and unfluoridated Sonoma County. The Sonoma County Board of Supervisors decided to not fluoridate the County because the Public Health Division could not produce proof of effectiveness nor safety, and there are more cost effective ways to prevent tooth decay.

We no longer need to risk our health. This citizen qualified measure requires the City to temporarily stop water fluoridation until a toxicological report and written verification of fluoride’s safety for ingestion is provided. A list of contaminants each batch of fluoride contains is also required. If fluoridation truly is safe, providing the required safety documents should be effortless. Vote Yes on Measure T.

Official arguments against
The following official argument was submitted in opposition to the measure: Fluoride protects every tooth, every day, for every body. Healdsburg residents voted overwhelmingly in 2014 to keep our community water fluoridation program, reaffirming our 60 year commitment to support good dental health for everyone. Today, the facts are still the same:

Water fluoridation works. It prevents cavities and tooth loss. It is so safe and effective that the Centers for Disease Control and Prevention hailed community water fluoridation as “one of the 10 great public health achievements of the 20th century.”

Water fluoridation is fair. It protects the dental health of the young and the old alike, regardless of income level. It is the safest and most economical way to provide cavity-fighting benefits for all people.

Fluoride occurs naturally in almost all water sources. Scientists found long ago that optimal amounts of fluoride protect teeth from decay. For decades, many cities, such as Palo Alto, San Francisco, and Healdsburg have supplemented their water with fluoride to achieve those benefits. Our community deserves the best, let’s make sure we continue to provide it.

Ask your physician, dentist, or nurse practitioner and check the facts. For accurate information about fluoride, please visit, www.ilikemyteeth.org

Don’t be fooled by a “moratorium,” whose requirements are purposefully unachievable and, if enacted, would stop community water fluoridation permanently. Keep Healdsburg’s water fluoridated. Vote No on Measure T[2]

Path to the ballot: This measure was put on the ballot through a successful initiative petition campaign.