LUTHER BURBANK & SONOMA COUNTY
Horticulturalist Luther Burbank’s father died when he was 21 years old, and Burbank used his inheritance to buy a 17-acre plot of land near his childhood home in Massachusetts. There, he developed the Burbank potato. In his mid 20s, Burbank sold the rights to the Burbank potato for $150 and used the money to travel to Santa Rosa, in the heart of Northern California’s Sonoma County. Luther Burbank lived in Santa Rosa for over 50 years, and said of Sonoma County, “I firmly believe, from what I have seen, that this is the chosen spot of all this earth as far as Nature is concerned.”

Most Sonoma County residents would agree. Sonoma County’s microclimates are temperate, its land is fertile and, even in these years of drought, Sonoma County is blessed by the Russian River and its watershed.

Sonoma County encompasses more than 1 million acres of land and water, rich in scenic beauty, mostly open space and agricultural land, with an array of parks, recreational facilities, campsites and lakes. The county has approximately 123,070 acres of surface water area, of which 8,580 are bay waters.

Nestled in the heart of Northern California Wine Country, Sonoma County is a wonderful place to visit, and an even better place to live, because residents are great hosts, but even better neighbors.

THE SONOMA COUNTY BOARD OF SUPERVISORS
According to the 2010 Census, Sonoma County has 163,436 residents. The County is a representative democracy, divided into five districts, roughly equal in population. Each district elects a Supervisor to a four year term on Sonoma County’s governing body, the Board of Supervisors.
The 2019 Sonoma County Board of Supervisors: District 1 – Susan Gorin , District 4 – James Gore, District 3 – Shirlee Zane (Vice-Chair), District 5 – Lynda Hopkins (Chair Pro-Tem), District 2 – David Rabbitt (Chair).
The Board of Supervisors sets priorities for Sonoma County, establishing growth and development policies, overseeing the departments and agencies that provide county-wide services, including health and welfare programs, public safety programs, and elections, and municipal services like law enforcement and fire protection in unincorporated areas.
THE COUNTY ADMINISTRATOR

SONOMA COUNTY WATER SYSTEMS: Private wells meet some residential and agricultural needs. Some communities, like Healdsburg, Sebastopol and Cloverdale, are supplied by municipal well fields. The Sonoma County Water Agency (SCWA) provides all the water for some communities. Others, like Rohnert Park, use a combination of municipal wells and water from SCWA. 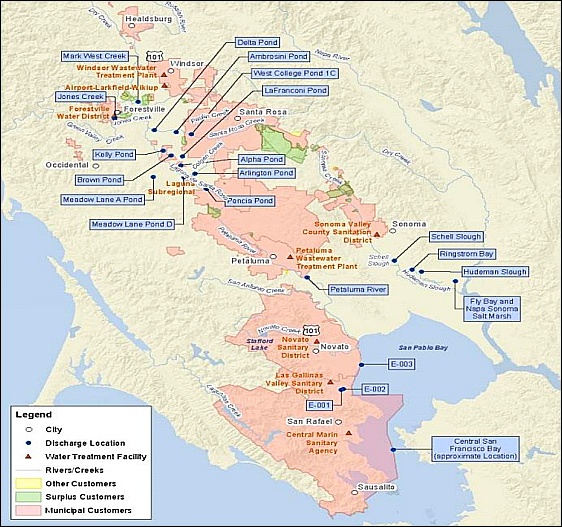