Water for the most populous areas of Marin County is provided by two public water agencies, the North Marin Water District (NMWD) and Marin Municipal Water District (MMWD). MMWD water has been fluoridated since 1972. NMWD water is not fluoridated, but is under threat from a Sonoma County Health Department fluoridation proposal. Learn why below.

NORTH MARIN WATER DISTRICT (NMWD) was formed in 1948. Shortly thereafter, “voters approved bond issues to purchase and upgrade the private water system and to construct Stafford Dam and treatment facilities. The dam was completed in 1951, and the treatment plant was put into operation the following year.”

The balance of NMWD tapwater (80%) comes from the Russian River, which originates in Mendocino County. “At a point about 10 miles upstream of Guerneville, water is collected by five Ranney water collectors. These deep wells collect river water which has been infiltrated through 60 to 90 feet of naturally deposited sand and gravel to perforated pipes radiating from the bottom of each well. The thick layer of sand and gravel through which the water must pass before reaching the perforated collector pipes provides a highly efficient natural filtration process which, with the addition of chlorine, produces a clear, potable, bacteria-free water. This water is then pumped directly into the aqueduct system” (quotations from NMWD website).

NMWD serves the areas in green, including the city of Novato. 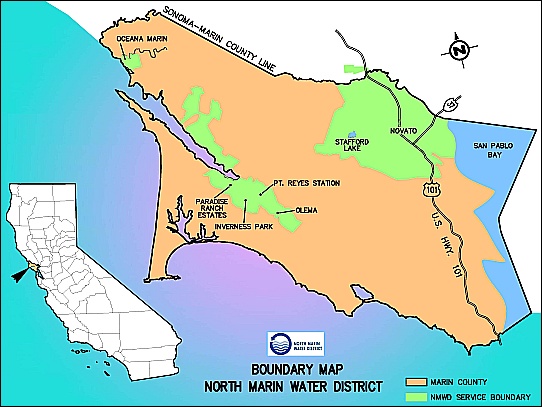 Engineering and environmental studies for the proposed fluoridation of SCWA water should be complete by the end of 2014, and the Sonoma County Supervisors are expected to make a decision in early 2015.

In most cases, in the United States, water fluoridation is implemented through individual municipal or other retail water suppliers.

An unusual feature of the  Sonoma County water fluoridation proposal is that, if it is passed, implementation would be through a water wholesaler (SCWA), not through individual retail suppliers. Because of the practical issues involved in adding fluoridation chemicals to SCWA water, the Agency could provide only fluoridated water to its customers, including NMWD, which does not want it.

In 1995 California passed AB733, creating a  State fluoridation mandate for water systems with over 10,000 active connections (practically speaking, one water bill = one connection).

It is a curious fact that while SCWA’s water customers, taken together, have many more than 10, 000 connections, as a wholesaler, SCWA itself has only 156 active connections. Therefore the proposed water fluoridation through SCWA  does not  fall under the California State Fluoridation Mandate. In Sonoma County, only the cities of Petaluma and Santa Rosa have over 10,000 connections.

Cotati, a small city in Sonoma County, is one of SCWA’s customers. A 2013 decision by the Cotati City Council might prove instrumental in preventing NMWD water fluoridation.

Following a recommendation of the 2013 Sonoma County Civil Grand Jury Report on Fluoridation, the Cotati City Council placed a discussion of water fluoridation on the agenda for the November 12, 2013 meeting.

There were presentations for and against water fluoridation, with thyroid specialist Dr. Richard Shames, MD providing expert witness testimony on the effects of ingested fluoride  on thyroid function, followed by comments from the public, including local dentists representing both sides if the issue, and North Marin Water District (NMWD) General Manager, and Chair of the Technical Advisory Committee (TAC) of SCWA, Chris De Gabriele, who spoke against SCWA water fluoridation from an engineer’s point of view.

In the discussion that followed, one Council member compared fluoridation to “prescribing a drug to a person who may not want it or need it.” Another expressed concerns about the potential effects of water fluoridation chemicals on wildlife, possibly undercutting hard-won successes in salmon restoration.

In a unanimous vote, the  Cotati City Council rejected water fluoridation, and formally notified the Sonoma County Board of Supervisors of their decision.

READ City Councilmember, and 2013 Cotati Mayor, Mark Landman’s article explaining his reasons for voting no on fluoridation of Cotati’s water.

THE RESTRUCTURED AGREEMENT
SCWA and its Prime customers operate under what is known as the Restructured Agreement for Water Supply, an agreement that took eight years to achieve, requires that any major changes regarding the water supply have the unanimous consent of all signers: Sonoma County Water Agency, City of Cotati, City of Petaluma, City of Santa Rosa, City of Sonoma, North Marin Water District, Town of Windsor, and Valley of the Moon Water District. Water fluoridation would be a major change.

In February 2014, the City of Sonoma, and in April 2015, Valley of the Moon Water District,  joined the City of Cotati in formally opting out of the proposed SCWA water fluoridation. If the conditions of the Restructured Agreement are met, and unanimity is required for fluoridating SCWA water, the decisions of these three small Sonoma County water districts will be significant, and NMWD might be spared fluoridated water, no matter what the Sonoma County Board of Supervisors might approve in the future.

MARIN MUNICIPAL WATER DISTRICT (MMWD) was chartered in 1912 as California’s first municipal water district. Today it serves ten towns in southern Marin County, most of them “along the Highway 101 and Sir Francis Drake corridors, as well as some unincorporated areas in southeast Marin County.” MMWD is governed by Directors who are elected officials, each representing a Division in the District. The decisions of the MMWD Board of Directors have the force of law. 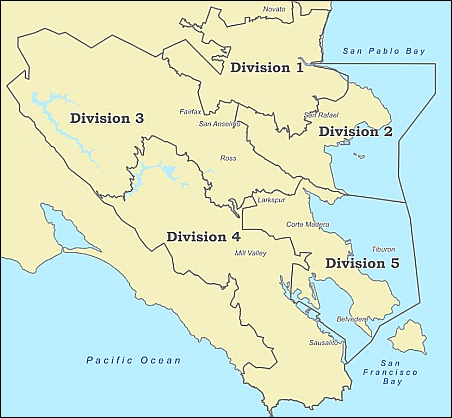 “75% of MMWD water comes from the Mount Tamalpais watershed, and the West Marin Hills, mostly from areas owned by MMWD, collected in seven District reservoirs for treatment before delivery” (from MMWD website). 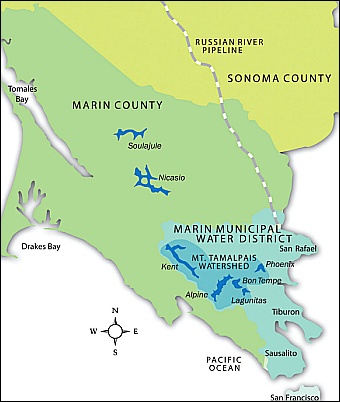 MMWD & THE PRECAUTIONARY PRINCIPLE
In 2007 the Marin Municipal Water District adopted “The Precautionary Principle” as Board Policy. The policy asserts: “The community has a right to know complete and accurate information on potential human health and environmental impacts associated with the selection of products, services, operations or plans. The burden to supply this information lies with the proponent, not with the general public.”

Residents and visitors alike respect that MMWD is leading the way among Marin County governing bodies, by applying the Precautionary Principle in its 2015 decision to halt consideration of using glyphosate for weed control on District properties. However, to date the Board has been overcautious about applying the Precautionary Principle to the fluoridation of District water.

MMWD WATER FLUORIDATION
In 1972 MMWD water fluoridation was approved by a vote of district residents, and reconfirmed in 1978.

As in over 95% of fluoridated communities in the United States, the chemical used to fluoridate MMWD water is hydrofluorosilicic acid (HFSA), a heavy-metal-contaminated byproduct of the phosphate fertilizer industry.

LEGAL GROUNDS TO STOP MMWD FLUORIDATION NOW
Even though MMWD falls under the AB733 connections requirement, and in spite of past voter endorsement, MMWD has legal grounds to stop water fluoridation.

Those legal grounds were explained to the MMWD Board of Directors by Clean Water Sonoma-Marin Director Dawna Gallagher-Stroeh in her PowerPoint presentation, “Five Reasons to Halt Water Fluoridation Immediately“ (7/19/2013).

MMWD BOARD OF DIRECTORS
Although Marin Municipal Water District Board has legal grounds to stop water fluoridation immediately, the position of the majority on the current Board is that District fluoridation will continue until District residents vote to reject MMWD water fluoridation, and the State Legislature repeals AB733 (1995), the California Fluoridation Mandate.

Former Division 3 MMWD Board member Liza Crosse said, “If, in the future the voters of Marin overturned the 1972 votes, and through an initiative disapprove fluoridation, I would be prepared to work within the District and the State of California to seek an exemption to the State law to terminate fluoridation.”

After the November 2014 election,  the Division 3 seat passed from Crosse to Larry Bragman, who opposes MMWD water fluoridation on legal grounds.

MMWD water has been fluoridated with hydrofluorosilicic acid since 1973. In all that time, no scientific studies have been provided that verify the water’s safety for ingestion by all consumers.